Home Championship Southampton ‘eyeing up’ Ligue 1 defender after he has ‘often impressed’ this...
SHARE

Southampton are ‘eyeing up’ Metz defender Boubakar Kouyate after his impressive performances in France this season but face competition from Norwich for him.

That’s according to L’Equipe, who say the Premier League duo are one of several clubs all showing an interest in the 24-year-old.

Kouyate has been a regular for Metz this season after arriving in a £3.15m deal from Troyes in August last year.

According to the newspaper, he has ‘often impressed’ in his 25 appearances this season, and this has earned him attention from around Europe.

Southampton and newly promoted Norwich are showing interest from the Premier League, while both Roma and Atalanta are also ‘eyeing him up’ in Italy.

No side have made a move as yet, and there is no indication that any of the four will be moving any time soon, just that they are interested in the Mali international.

Interest from Southampton makes plenty of sense, given they’ve conceded the second-most goals in the league this season and more than relegated Sheffield United. 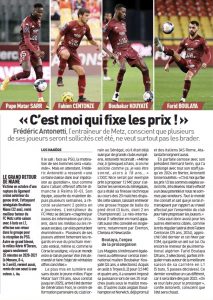 They’ve also seen the likes of Jan Bednarek and Jannik Vestergaard linked with moves elsewhere, so interest in a new centre back makes plenty of sense.

Norwich have not struggled defensively in the Championship this year, they have the second-best record in the division behind Watford, but perhaps Daniel Farke is just looking to ensure he has options next season.

Either way, both clubs are named as potential suitors for Kouyate this summer, making his name one to keep an eye on as we get closer to the summer transfer window.