Home Premier League Brighton Southampton, Brighton and Newcastle among clubs to have made contact for signing
SHARE

Newcastle United, Brighton and Southampton have all ‘made enquiries’ for Benfica full-back Nuno Tavares this summer.

That’s according to O Jogo, who say he could be available for as little as €15m but all three clubs face competition from Napoli.

The newspaper explains that the 21-years-old’s future is yet to be defined at Benfica because of interest from the Serie A side.

They’ve made him their number one target to fill the left-back spot and want to secure his signature for next season, but that has been delayed because of Gennaro Gattuso’s departure.

His replacement is yet to be named, and now there is a wait and see to discover if the new coach wants him and what they’re willing to pay to get him.

If not, there are options elsewhere as Benfica are willing to ignore his £88m release clause and negotiate a deal for the defender at ‘much lower sums’.

What they are isn’t mentioned, but Napoli are willing to offer €15m and include the option of various clauses to help it go higher. 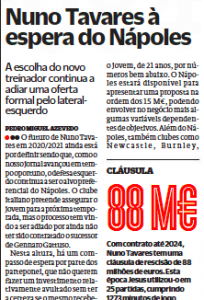 They’re not the only side interested, though, with Newcastle, Brighton and Southampton all said to have ‘made enquiries’ as well.

Newcastle are well stocked in that position, so it makes less sense for them to spend a limited budget bringing in Tavares. The interest is apparently there, though, nonetheless.