Multiple reports coming out of the Catalan media have suggested Jean-Clair Todibo has no future at the Camp Nou and Barcelona are looking to offload him in the ongoing window.

Everton, Wolverhampton Wanderers and Leicester City have been pushed forward as suitors for the 20-year-old in the past few days.

Two months ago, Southampton and Watford were also credited with an interest in the defender.

Ralph Hasenhüttl’s side and the Hornets get a mention in today’s edition of Mundo Deportivo, as they state the two English clubs, along with Bayer Leverkusen, AC Milan and AS Monaco ‘have become interested’ in acquiring the centre-back’s services.

It’s claimed various intermediaries have ‘transferred offers’ from the aforementioned clubs to Barca, but none of the proposals meet the requirements of Ronald Koeman’s side.

As per the report, the Blaugrana are still demanding €25m, and have not lowered the France U20 international’s asking price and are also not willing to let him go out on loan. 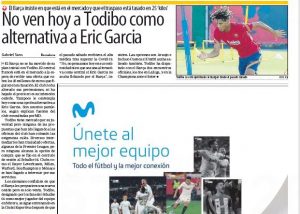 The Spanish giants continue to insist the player will not continue at the club and they don’t even consider him as an ‘alternative option’ to Manchester City’s Eric García.

Although Barcelona are keen to cut ties with Todibo, it’ll be interesting to see what they will do, if neither the Saints, Watford or any other potential suitors are willing to pay the €25m fee demanded by Barca.