Leeds United are one of the clubs interested in Lanús winger Pedro De La Vega, according to the Argentine press.

Newspaper Olé has an interesting piece on the player today, saying he’s been impressing European sides since his debut for the club.

First it was Italian sides who promised to make an offer, but that never happened. Now this summer, both Atalanta and Leeds could take him from Buenos Aires.

It’s been said in the south of the Argentine capital that a representative with contacts to the Whites would be delivering an offer to Lanús. That bid hasn’t been presented yet. 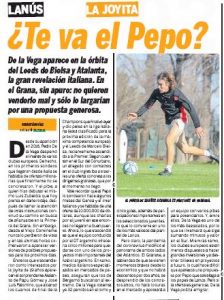 Even though the Italian media previously said that local clubs would offer US$10m for De La Vega, Leeds United would only be expected to put US$5m on the table.

Lanús’ main plan would be to keep the 19-year-old at the club, especially because they don’t want to make big signings and want to keep the youngsters they already have. However, if a good bid arrives, they’d have to let him go anyway.

De La Vega has 34 appearances for the club so far, having featured on both wings. He’s scored five goals.