Gareth Bale does not see himself staying at Tottenham next season and believes he will be a Real Madrid player once again instead.

That’s according to AS, who say sources ‘very close’ to the Welshman have told them that he ‘sees himself’ playing for Madrid next season.

These same sources have revealed that there is no clause in his current loan deal with Tottenham that will allow him to extend his deal at the club into next season.

So, for Bale to continue in London, Tottenham would have to sort out a new negotiation with Madrid, which would ‘have to start from scratch.’

This would require finding some sort of solution to Bale’s wages, with the Welshman determined to ensure there is no drop off from his current pay packet, with his loan deal at Tottenham seeing them pay half this year.

Most of Bale’s thinking is centered around that but also the future of Zinedine Zidane, with whom he shares a rocky relationship, to say the best.

If the Frenchman were to leave the Bernabeu this summer, Bale ‘would be delighted’ to end his career with Madrid ‘in style’.

There is even a growing sense in the Spanish capital that he could be of use, with his performances this season showing there is still a player there. 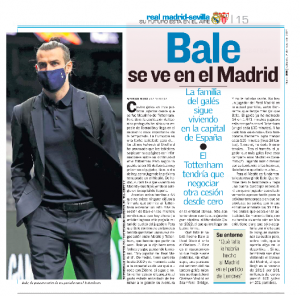 Indeed, the only player who’s scored more than Bale this season is Karim Benzema, a further indication that there is a place for him.

There’s a feeling he ‘would have contributed a lot’, and his resurgence, particularly since Jose Mourinho was sacked by Tottenham, is now ‘fundamental’ to the club’s plans.

If he can finish the season well and have a good European Championships, it will have an impact on if he is usable for next season or leaves, the latter of which would save the club €30m.

At the minute, Bale has made it clear he would only accept an offer that allows him to maintain his wages and ‘brings him something in sporting terms’, so Tottenham will have to find a way to offer both if they wish to keep him.  If not, he will play out his final year in Madrid.