Two days after the original report, it’s now time for the Portuguese media to put the rumour of Casillas to Newcastle United in the spotlight.

Newspapers Correio da Manhã, O Jogo, A Bola and Record are all covering it today. Instead of crediting their compatriots from Diário de Notícias, they actually claim the story comes from Spanish outlet AS, who covered the story later.

Anyway, all the stories today are very similar, in a way that all of them believe Casillas could be leaving Porto soon. But none of them seems to have some new information on contacts from Newcastle United or any other clubs.

The most interesting information comes from Correio da Manhã, who claim Porto would really not be bothered if the goalkeeper leaves in January. 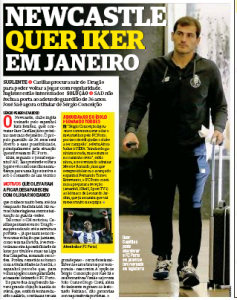 Casillas accepted a decrease in his salary when signing a new contract this summer, but it’s still too much for Porto. He’s the player with the biggest wages in the squad, currently making €6m gross per season.

That’s obviously a lot for a bench player, so Porto won’t be standing in his way in case he chooses to leave. And with his deal expiring at the end of the season, it’s unlikely that they will make it hard for him to be sold now.

It’s all there for Newcastle United and Rafael Benitez then, their interest just needs to be real.