Home Europe “It’s too soon to talk about it” – Southampton owned player on...
SHARE

Even if he only managed to make one appearance since arriving at Sampdoria on loan, Southampton’s Maya Yoshida has quickly won over the local fanbase.

Learning Italian and trying to make the best out of his situation, the centre-back is already a fan favourite, regardless of how little they’ve seen him play.

In fact, there’s already talk about him staying with Claudio Ranieri in Italy, but the Southampton centre-back issued a word of caution in an interview with Gazzetta dello Sport about the whole situation.

Asked if he’d spoken to Sampdoria forward Manolo Gabbiadini before the move, since they had both played together at St Mary’s, the player explained he only had a ‘few hours’ to decide, but that he ‘had heard’ from the striker.

As for whether or not he was hoping to stay in Italy, he said: “It’s too soon to talk about it. I came here to enjoy this opportunity and keep Sampdoria up in Serie A. First, we reach the target”. 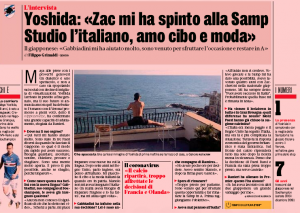 The 31-year-old still has another year on his contract at Southampton, and with no purchase clause in the loan deal taking him to the Italian side, negotiations would seemingly have to start from scratch.

However, considering Ralph Hasenhüttl had little use for him, we doubt the Premier League side will be asking for an exorbitant price.