It’s already been a couple of days since Manchester United lost to Aston Villa, and the penalty missed by Bruno Fernandes at the end of the match still hasn’t stopped being commented on.

Now as Portuguese newspaper Record comes up with a new piece about it today, columnist Alexandre Pais doesn’t hesitate to name the person he finds most responsible for the defeat. That’s Ole Gunnar Solskjaer.

The outlet’s former director claims the penalty should have been taken by Cristiano Ronaldo, but it’s not Bruno himself who was supposed to hand the 36-year-old the ball.

Pais claims Bruno has the right to be the main shooter in the squad, but in that situation, in the final minutes of the game, it’s ‘the greatest specialist’ who should have had the chance to equalise the score. 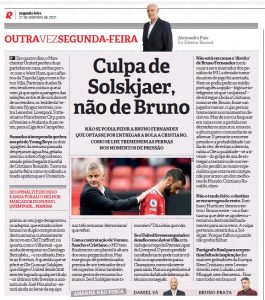 “Emiliano Martínez ‘distracted’ Bruno, and Bruno – or the ghost that took hold of him – shot wildly into the clouds. The entire fault belongs to Solskjaer. Because he failed when he couldn’t,” says the piece.

This isn’t the only criticism Solskjaer gets from Pais. When mentioning that Manchester United signed the likes of Cristiano Ronaldo, Raphael Varane and Jadon Sancho this summer, it’s claimed that the manager doesn’t look like the coach of a ‘superior level’ to handle such a squad.

Last season, Bruno Fernandes missed one of the 14 penalties he took, while Cristiano Ronaldo missed three of 15. Those are statistics that suggest the Manchester United manager didn’t do anything too controversial when sticking with his trusted taker.

Indeed, had Solskjaer shouted over to Bruno to tell him to pass the ball to his compatriot, then whether Ronaldo had missed or not, the media stories would still be critical, likely speaking of a drop in importance for Fernandes at Manchester United.