Portuguese side Braga are reportedly on the verge of completing the signing of Manchester City fullback Yan Couto.

Newspaper O Jogo writes that the 19-year-old ‘no longer escapes’ from the club as there’s only a ‘very small step’ left for the deal to be concluded following his decision to turn down Celtic.

Couto is set to join Braga on a one-year loan, while he Portuguese side will not have a buying option over him, and should take on two thirds of his salary.

It’s said the likes of Celtic and Olympiacos were interested in the player, but the player’s will was ‘fundamental’ for him to join the Arsenalistas. 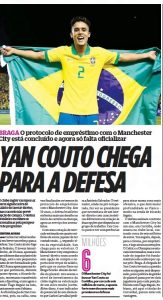 Even though he claimed to be hopeful to be available for Pep Guardiola’s side as soon as possible, this will be the second year he gets loaned out.

He already spent the 2020/21 season at Girona, where he managed to get decent playing time and made 30 appearances, and should now have a new adventure in Portugal after deciding to turn down a move to Parkhead, which led Celtic to focus on other players instead.

The youngster’s contract with Manchester City runs until 2025.