Home Championship “We had a ‘small drink'” – Norwich City player on party, and...
SHARE

First of all, congratulations to Norwich City!

In the midst of all the fury over the proposed European Super League, the Canaries being promoted back to the Premier League has been largely pushed aside. The club have had a superb season and will be looking forward to taking their place in the top flight, regardless of all the drama currently surrounding it.

Tim Krul has played a big part in Norwich’s success this season, with the goalkeeper making 33 appearances. After putting his few difficult years behind him, the Dutchman has found success again with the Championship leaders and has been speaking to De Telegraaf about the promotion.

Norwich sealed their promotion thanks to the results of others, and Krul was asked how the players experienced it all, to which he replied: “Everyone was in their own room, with the door open. And as the matches of especially Swansea and Brentford progressed, the uproar increased. If they both didn’t win, we would be sure of a place in the top two and thus promotion to the Premier League.”

Asked if there was some kind of promotion party after the 3-1 loss to Bournemouth, Krul suggested there’d been a little gathering but not anything too wild: “Corona proof, in the bubble. In the stadium music was played in a room and we had a ‘small drink’ with the players and the staff. We didn’t want to make it too big either, because we still want to become champions. The focus is now on Tuesday evening.” 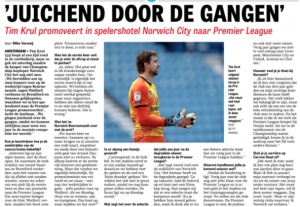 Asked whether he’ll be ending his career with Norwich City, Krul seemed to suggest that was a possibility, but wouldn’t close the door completely on a move elsewhere, even in the summer window: “I don’t know, because I plan to continue for many more years. But I renewed my contract in January and will be under contract until the summer of 2024. It must be very strange if I want to leave this summer. Never say never. But there are only a few clubs that I would leave Norwich for.”