Whether you like it or not, there is a chance, albeit small, that Edinson Cavani could leave Manchester United in the summer.

The Uruguayan has been heavily linked with a return to South America, with Boca Juniors whispering sweet nothings in his ear through Juan Román Riquelme, meaning he would need to be replaced.

Offering a good plan B for Ole Gunnar Solskjaer, Cavani would need to replaced adequately by the staff, and Dusan Vlahović could fit that bill.

Tall (he’s just under 6’3”) and capable of finding the back of the net fairly regularly, as shown by his 12 goals in 27 games this season for a struggling Fiorentina, the Serbian has been linked with a move away from Florence numerous times this year. 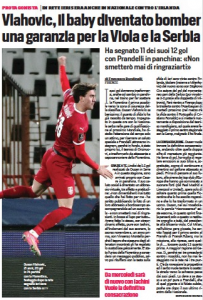 It’s normally been clubs like Borussia Dortmund, Tottenham or even West Ham, but Corriere dello Sport reckon some bigger sharks are also circling.

Looking at the towering striker’s situation, they explain ‘sirens from top European clubs have already started to ring strongly’ before listing Real Madrid, Manchester United and Liverpool as potential candidates for his transfer.

The Premier League pair have often been named alongside his teammate, Nikola Milenković, but this is the first time we’ve seen Vlahović strongly pushed towards Old Trafford, and it’s one we’ll be keeping an eye on going forward.