On June 30th, in the days before England’s great World Cup triumph, Ouest France reported Wolves’ Prince Oniangue could be days away from a move to Caen.

The French club’s president Gilles Sergent was said to have confirmed the potential transfer, and Caen wanted him for the start of their preseason training.

On Wednesday the same French newspaper had a snippet confirming interest in the Wolves player still exists, and now they go a bit further.

Prince Oniangue is the ‘hottest track’ for Caen’s midfield signing and he’s seen as a ‘sure bet’ for Ligue 1. Good performances in France have obviously impressed the club, and they’re trying to reach a deal with Wolves. 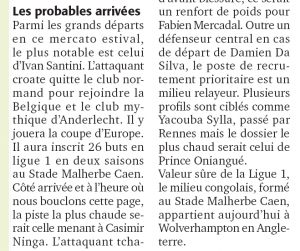 Caen’s rush is probably greater than that at the Premier League club.

Prince Oniangue’s exit isn’t exactly going to be a big transfer for Wolves, and there may be other business taking precedence right now.

Still, Caen will keep trying to get this over the line quickly.