Andraž Šporar is expected to leave Sporting this summer, with the 27-year-old unable to find a place in the squad of the Portuguese champions.

He spent the second half of last season on loan at SC Braga, although it’s not thought a return to the club is on the cards.

A Bola report signing for Middlesbrough is a ‘possible destiny’ for the player, and they also detail interest from elsewhere. There’s clubs keen in Belgium, and Majorca has also shown an interest.

Feyenoord have made an attempt to sign the Slovenian striker, but their offer of €5m was deemed insufficient. Having paid a flat fee of €6m, plus bonuses, to Slovan Bratislava in January 2020, Sporting now want around €6-6.5m, and that’s what Middlesbrough would be asked for. 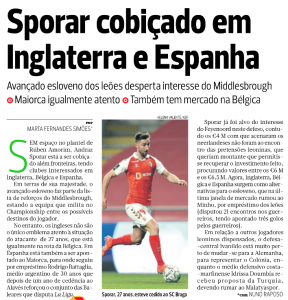 He scored six goals last season in 29 league matches, with most of those appearances being short stints as a substitute.

It was at Slovan Bratislava that Šporar really impressed, scoring 12 league goals in 11 matches in the 19/20 season before being signed by the Lisbon club. The previous season he’d scored 34 times in 36 matches, adding nine assists along the way.