Paul Pogba and Paulo Dybala ‘dream’ of playing together once again and that could spark a Juventus move for the Manchester United man.

Pogba is looking increasingly likely to leave Manchester United in the summer after a slow and steady breakdown in his relationship with the club.

Former club Juventus are one of those linked with making a potential move, the Frenchman having starred for the Italian club after leaving Old Trafford in 2012.

Pogba is still well thought of in Italy and, according to Tuttosport, Juventus may be tempted into making a move as part of a plan to keep Dybala at the club.

The Argentine is under contract in Turin until 2022, but Juve want to extend that. To do so, however, they need more than ‘figures and zeros’.

Factors such as the consistency of the project, the technical considerations and ambitions and the ‘affinity with the comrades’ will all play their part in his decision.

Dybala needs to be convinced that the side is being ‘strengthened and ambitious’ and re-signing Pogba would show they are both, thus ‘stimulating’ the idea of bringing him back.

It would be a ‘further incentive’ to convincing Dybala to extend his stay as it would allow him to ‘realise their dream’ of playing together. 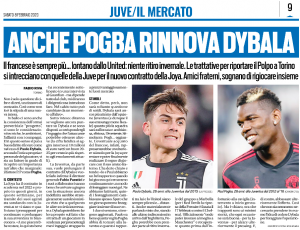 Dybala is said to ‘know’ how much Pogba wants to return to Juventus and how his relationship with Manchester United is increasingly distant.

Tuttosport explain that it is clear that relations are at an ‘all-time low’ and every deterioration is good for Juventus as it raises the ‘pressure’ on United to sell.

It’s believed that the worse things get, the less they will have to pay Manchester United for Pogba, meaning they wouldn’t have to sell Dybala to fund it and could link them up again, something both players are seemingly dreaming of.