Idrissa Gana Gueye potentially moving to PSG is a story which was always going to reappear this summer.

The French club made attempts to sign the midfielder during the winter market, and there was clearly some annoyance in the media close to PSG over Everton’s stance. Dubbed ‘greedy’ on more than one occasion, the Premier League club rightly wouldn’t let themselves be bullied.

Trying to sign Gueye for €30m or less during January was an insult to both Everton and the standing of the player, especially given PSG’s record of spending.

Antero Henrique, then PSG sports director is said to have ‘smothered’ the potential deal, report Le Parisien. Thomas Tuchel was very keen, and the insinuation has been that Henrique thought he knew better, as often seemed to be the case. 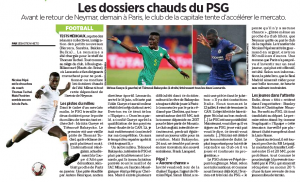 Now Leonardo has the role in Paris and it’s Tuchel’s remaining desire for Gueye which makes the transfer a ‘hot file’ at PSG.

This still requires a fee big enough to please Everton, and an alternative for the Ligue 1 champions is Chelsea’s Tiémoué Bakayoko.

It’s thought he’d cost €40m, which presents the question of why PSG don’t just offer that for the man Tuchel really wants.