Marco Silva got the club to eighth in his first season in charge, and whilst that wasn’t a bad result, the expectations around Goodison Park have been big.

That they now find themselves in the relegation zone has inevitably seen Silva’s position questioned, and should they continue to stutter then the Portuguese coach will be lucky to get to Christmas.

His agent Carlos Goncalves has been speaking to Record, and the Portuguese newspaper asked a couple of questions about the Everton boss.

First, Record wanted to know if Silva and Goncalves had planned his move to the Premier League before it happened: “Yes, Marco always had that ambition and hence took the risk, gambled in January and went to the condemned Hull City. The club eventually were relegated but the work he did was unanimously well received. So he had four invitations to stay in the Premier League and moved to Watford. I think all coaches have this ambition, because it is the most competitive championship in the world and where the best are.” 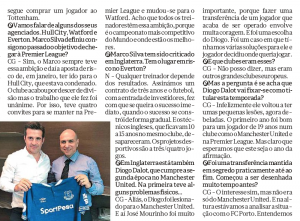 Then asked if the manager’s position at Everton is under threat, the agent said: “Any coach depends on the results. We signed a three-year contract and football, with the entry of investors, makes us want immediate success, when success is actually built gradually. And the English coaches, who were 10 to 15 years at the same club, disappeared.”

Goncalves clearly believes his client deserves more time at the Toffees, but Silva will need to pick up points across the games in October and November or he’ll soon need his agent’s help again.