For many years, Samir Nasri was one of the stars of the Premier League.

First at Arsenal, and then at Manchester City, the former France international totalled 220 appearances in the English top-tier, scoring 36 goals and assisting another 44.

In that time, he has worked with two of the greatest managers of all time, Arsène Wenger and Pep Guardiola, but it’s the latter of the two who appears to have left the biggest impression on him after their time together.

Now retired and working for Canal+ in France, the 34-year-old was asked to preview the upcoming Champions League clash between Manchester City and Paris Saint-Germain for Le Journal du Dimanche, where he was asked about the Spaniard.

He said: “He shocked me. Tactically, he’s a genius, and I know what that word means. I worked with great managers, but he has something extra. It borderlines obsession. He knows everything. He sees spaces and shows them to you. At Arsenal, they called us the English Barcelona, but when we played the true Barcelona, we couldn’t do it. Impossible to press them. I didn’t understand.

“Then, I worked with Pep and I understood. With his organisation, you know where your teammates are at every moment, to the centimetre. And if you’re not where you’re meant to be, he lays into you. He doesn’t care who you are, your status or your wages, if you aren’t playing for the team, you go on the bench”. 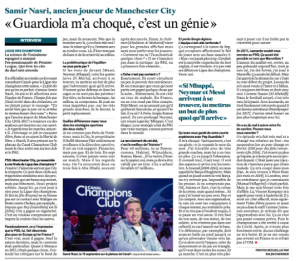 That was on show at the weekend, when Manchester City made Chelsea suffer their first loss of the season in a 1-0 win at Stamford Bridge, with Jack Grealish, Phil Foden and Gabriel Jesus all leading the line, and some referring to the performance as a pressing masterclass.

Having left Sergio Agüero leave and bought Jack Grealish for £100m, many seem to think the club lack a true goalscorer, but Nasri doesn’t think that’s the case, and this is what Guardiola wanted and the club actually got stronger in the process.

He added: “It corresponds to his vision, as he always enjoyed playing with a false 9. Kun wasn’t playing much anymore. Grealish is the new favourite of English football, he’s starting and hasn’t missed his start in the Champions League, so yes [they got stronger]”.