Wigan Athletic have been linked with a shock summer move for Fenerbahçe striker Emmanuel Emenike. The Nigeria international looks surplus to requirements with the Turkish giants, and Hull City have also been showing an interest in the player.

Sabah claim Emenike’s agent has been unable to find him a suitable team to play in the Premier League, and that only Wigan have shown an interest in the player.

Wigan Athletic have informed his agent they’ll only sign him on a one year deal, and they’ve also insisted they want him on a free transfer.

SabahSpor report Emenike is very disappointed about his situation, and may now have to look elsewhere to kickstart his career. The likelihood is the Nigerian will turn down Wigan Athletic’s advances given there’s a good chance they will be playing in League One next season.

Earlier this week we covered reports from Turkey that Emenike was looking for a return to the Premier League after his spell with West Ham United, and a move to Hull City could still be a possibility. Hull City made an approach for the Nigerian during the January window, but a move never materialised.

A deal failed to happen because Fenerbahce would only agree to a permanent transfer, whilst Hull City wanted a loan instead. However, the Turkish club are now even more desperate to offload the striker, and are prepared to let him leave on a free. 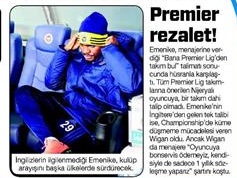 It’s also worth noting Emenike was linked with a move to Hull City around the time Mike Phelen was sacked by the Premier League side.

In recent days there have been claims Phelan is in line to be installed as the new Wigan Athletic manager, following the dismissal of Warren Joyce. The move for Emenike could give a hint as to who David Sharpe will appoint next.

“I wanted to leave” – Player explains he pushed for Arsenal...