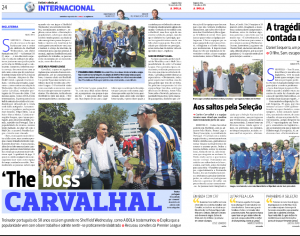 No matter what division they are in, all the Portuguese people who in English football always have a good coverage from their homeland newspapers.

Portuguese newspaper A Bola were present at Sheffield Wednesday’s event Owls in the Park this Sunday, where they met the manager Carlos Carvalhal for a chat.

In a very nice interview, the manager talked about the affection from the fans, his talks with Premier League clubs and many other topics.

When asked about failing to get the promotion, Carvalhal said: “Well, I don’t really like to be talking about it, but it happens because our work was very quickly absorbed. Our team, besides doing a great championship, play good football, one of the things that people value most here. The game’s quality.

“What me and my technical team could do in a short time, to change a style… usually people know that when they are going to see Sheffield Wednesday play, they will find good football.

On the interest from Premier League clubs, the manager confirmed that there were talks. Although A Bola mentions that Everton were linked many times, Carvalhal can’t reveal the name of the sides.

“I had direct talks with two Premier League teams, I can tell you, really direct to one of them, and I’m asked why I didn’t go – and I can’t say who they are. But after a year here and feeling that I have fans singing my name, players who are here with passion, a club where I am treated very well, and I can say almost being idolised, I did not feel absolutely any will to change.

“I’d have liked to be promoted with Wednesday, but staying here gives me great satisfaction because, more than money or prestige, I want to have the enjoyment of training and feeling happy to do what I like. Change happiness for money or prestige… I’m at a stage in my life that I don’t do it.”

Carvalhal also talked about Portugal’s title and where he watched the big game against France: “I saw the final with my staff at the restaurant in front of my house. We won the semifinals and in the final we had to eat the same dish, drink the same drink, sit in the same place, we had to be there, we didn’t let anyone sit there. It had given us luck and we wanted to keep the ritual. We looked like boys jumping at the bar!”