On Tuesday, apart from the World Cup, all the Portuguese newspapers have one subject in common: the investigation about corruption at Benfica.

The Lisbon side are currently being accused of having shady relationships with other clubs from the league, with the main resource for the scheme being the loan of players between them.

One of Benfica’s partners being investigated would be Vitória de Setúbal, and newspaper A Bola makes a big coverage of the situation.

As explained by the outlet, the Eagles loaned three players to Vitória last summer, with one moving the other way: João Amaral. 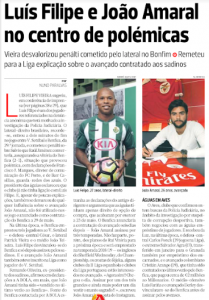 Besides the controversies about the players who joined Vitória, which we won’t be detailing here, there’s a doubt about when Benfica really signed Amaral. Because a Vitória director claimed the sale was made in the summer, while Benfica officially had him on a loan and only used a buy option to get him permanently at the end of the season.

Now why are we covering it? Because Sheffield Wednesday would be interested in Amaral, and that’s mentioned in today’s story from A Bola.

The newspaper claims that the player isn’t in Rui Vitória’s plans for the season, and should be loaned this summer. Besides the Owls, Croatian side Rijeka, as well as Portuguese and Spanish clubs would be interested.

Sheffield Wednesday’s interest in the striker had already been reported by A Bola this month, with the newspaper reporting that the Championship side were looking good in the race.

Now with part of this scandal involving Amaral, we wonder if the club will still be interested in taking him from Benfica this summer. Not that the player has done anything wrong, but English clubs normally try to avoid these kind of controversies.