Mundo Deportivo have an article in their Sunday edition which talks about Barcelona’s efforts to sign Marcus Rashford.

Long looking for a long term replacement for Luis Suarez, in 2018 Rashford ticked all the boxes Barca required. He was young but also had top level experience, was flexible in position, and had a contract situation with Manchester United with could have necessitated a sale had no agreement been found on a renewal.

The Catalan newspaper claims Rashford’s brothers were contacted in a ‘very serious attempt’, and the response was favourable. Despite his affinity to Manchester United, the player was excited by the prospect of joining Barcelona, and also by the big salary increase on offer.

However, Rashford quickly changed his mind, deciding that it wasn’t the time for such a move and that he’d prefer to commit his future to Old Trafford. 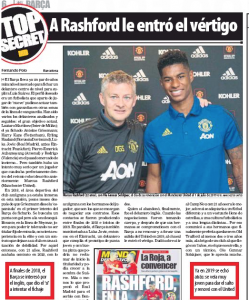 Mundo Deportivo say that was partly down to Manchester United splashing the cash and handing out a big renewal, something which they believe was helped by the Barcelona interest.

Reading between the lines, it’s quite possible Barca were simply used as leverage in renewal negotiations.