It wouldn’t be a normal day at Sport Witness if we didn’t cover at least one Simone Zaza to the Premier League story.

Most of them on Wednesday are very similar to Tuesday’s, with very little new information being revealed, but Il Mattino, a Naples based newspaper, give us a bit more about the negotiations between West Ham and Juventus regarding the player.

Napoli, who are faced with the decision of either rejecting offers for Manolo Gabbiadini or selling the Italian forward, are interested in Zaza in case they choose the latter of the two options, and we’re guessing someone’s told Il Mattino about Juventus’ demands. 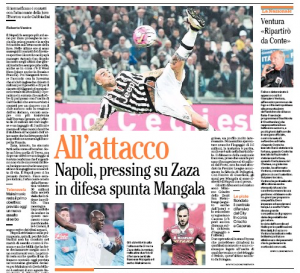 According to the Italian newspaper, the Serie A champions have told West Ham they would be happy to see Zaza leave on loan with a view to buy, but only if the Hammers were to pay €6m up front and then compulsorily pay €22m in the future.

This would put the deal at €28m (£23.8m), a fee West Ham were willing to spend on a striker this summer, and, penalty at the Euros aside, they would be getting a proven goalscorer were they to strike an agreement.

Slaven Bilic has admitted that, despite the arrival of Calleri, another striker could be coming in. Wilfried Bony is apparently an option, and so is Simone Zaza.