Home Europe Player’s next destination will be Manchester City should he move this summer...
SHARE

If you’ve been following Manchester City news here at Sport Witness over the past few weeks, even months, you’ll know that we’ve written a lot about Sergi Roberto and Nelson Semedo.

Barely a day goes by in which there isn’t talk about one of the Barcelona pair ending up at the Etihad this summer.

The short version of the story is that Manchester City are on the hunt for a right-back and have identified the Barça pair as ideal options.

That was the running story for several weeks until yesterday when Mundo Deportivo reported that they had discarded the idea of signing either player.

This was because they had ruled that Roberto would be too expensive and so was not a ‘feasible’ option, while Semedo did not fit into their style. There was also the issue of Joao Cancelo potentially staying at the club.

Either way, it seems a move to England will not be happening, but in the case of Roberto, that does not mean the interest has disappeared.

No, quite the contrary if Mundo Deportivo’s latest update on the situation is to be believed.

The newspaper explains that Barcelona’s wingbacks are the most ‘active’ positions for the club in terms of potential transfer activity this summer and one candidate is Roberto.

He does not want to leave and has made this clear but will ‘take into account what his club thinks’ when it comes to a transfer.

He is aware that Pep Guardiola is ‘attentive’ to his future, to the point that people in his entourage have told Mundo that if Barça made it clear they wanted to sell, his next club would be Manchester City. 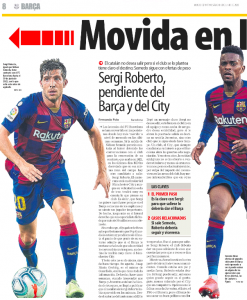 This interest is nothing new as Roberto happens to have the same agent as Guardiola, one Josep Maria Orobitg.

So when it emerged a few weeks ago that Barcelona could do a swap deal with Juventus including Roberto, Manchester City opened the door to a possible negotiation.

At the moment neither Barcelona or Roberto want him to move but, because of the impact Coronavirus has had on their finances, there is a chance a ‘force majeure’ could force them into a deal and should that happen, City will be waiting.