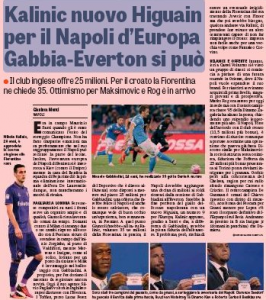 Everton are apparently looking to sign a striker in the last few days of the transfer window. The Merseyside club were interested in signing Deportivo La Coruna star Lucas Perez, but the Spaniard is close to signing for Arsenal.

Gazzetta say the offer is enough to make Napoli and the player himself happy.

It is reported Everton’s €25m for Gabbiadini will allow Napoli to make an offer for Fiorentina forward Nikola Kalinić.

The Italian forward didn’t get too many chances at Napoli last season due to Higuain’s impressive form, but could be a brilliant signing for Everton.

Gazzetta dello Sport’s claims back up SportMediaSet to a certain degree, who said yesterday that Gabbiadini’s agent was travelling to England to try and close a deal with Everton.