When you look at Burnley this season, the first thing that comes to mind isn’t ‘they remind me of Atlético Madrid’, but in Sean Dyche’s mind, that’s kind of what he’s going for.

While there remains a big gap between the two sides, the English manager believes the way the two play has some similarities, with one goal in mind: winning.

Speaking to France Football, Dyche explained how, despite having a base tactic (generally a 4-4-2), he tries to get his team to adapt to the opponent.

“Without wanting to compare to what Atlético Madrid are doing or putting myself in the same category as their manager, our ideas are close to being the same: create a team to win.” 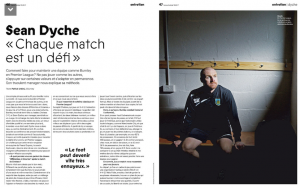 Now safe from relegation in their first season back in the Premier League, the Clarets can look forward to a summer spent trying to bolster a squad and ensure they can establish themselves in the league long-term.

However, even with the increased money they are going to receive from being in the Premier League, Dyche knows Burnley aren’t in a position to throw money around left, right and centre, meaning they need to adhere to a relatively strict approach on the transfer market.

He explained: “Burnley doesn’t have access to the same market as others, and we can’t cheat the system. When you can only put £5m on a transfer, you aren’t guaranteed immediate success. That’s why we try to be clever, we gamble, and, bit by bit, we grow those players.

“Michael Keane, our centre-back, is an example of what we do. He arrived here just over two years ago, and now he’s in the England team”.

As for the type of players they go for, Sean Dyche admitted that bringing in players from the lower divisions rather than abroad has its advantages, especially when it comes to adapting to the rigour of Premier League football.

One of the few English managers in the league, Dyche has shown that, even with small resources, his side are one to contend with in the Premier League.

After all, both Hull and Middlesbrough have gone straight back down. Burnley haven’t.