Chelsea are not afraid for Eden Hazard.

That’s Marca’s headline for a story today, saying the Blues have at least one more season (this one) with the Belgium star playing at Stamford Bridge, and won’t panic before that.

But with Marca being Marca, they’re obviously confident about Real Madrid getting a deal for the winger next summer.

His wish to join the Galacticos is reinforced by his own recent quotes, even though the player recently claimed he will not force his way out of Chelsea. 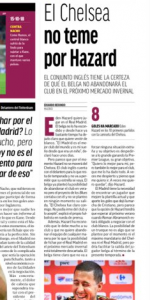 That’s why Marca believes that a January move is completely ruled out, leaving Real Madrid’s chances for the next summer.

By then, Hazard will have only one year left in his contract, and that’s probably why the outlet claims that Roman Abramovich will be ‘forced to negotiate’ with the Spanish side.

Marca doesn’t mention an amount that Real Madrid would offer or Chelsea would demand.

What they say is that even though a swap deal is not being planned by any of the clubs, this is a possibility that could make Hazard’s departure easier by the end of the season.