Turkish media outlet Star reports Fenerbahce are doing everything they can in order to convince FC Porto attacker Yacine Brahimi to join them, with West Ham United also said to be interested in the Algerian winger.

Yesterday we covered claims from Portugal that West Ham, Real Betis and Fenerbahce are all interested in signing Brahimi, who will play his last game for Porto at the weekend, against Sporting.

Star claims the Fenerbahce board have offered a generous salary and a signing on fee to convince Brahimi to move to Istanbul, which is said to be better than what West Ham are prepared to give the player.

Along with Fenerbahce and the Hammers, Star reports French club Marseille are also interested in signing Brahimi, but the Turkish club are hoping they can land the attacker.

Due to FFP implications, Fener are looking to bring in free agents this summer. 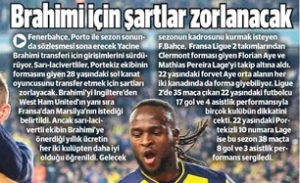 The Algerian international played 48 games for Porto in all competitions this season, scoring 13 goals.