Zlatan Ibrahimovic renewing or not at Manchester United was never going to be simple. The extra year on offer in the player’s deal wasn’t going to activated quietly at the earliest opportunity.

Ibrahimovic’s move to Manchester United was a transfer-by-a-thousand-cuts, with everyone dragged along on the ride. Usually the media are to blame for such sagas, but Zlatan gave so many hints and suggestions that it turned into something of a farce.

It was fun at first, inviting the Swedish media, and some from England, to a press conference he’d called himself in May whilst on international duty. Manchester United was what everyone wanted to talk about, and Zlatan knew it, giving a huge grin and nothing more when asked if he’d be joining the club.

Further press conferences followed, Manchester United accidentally-on-purpose put shirts on their website with his name on, and in June Zlatan launched his A-Z clothing range.

Huge smile from Zlatan when asked if he can confirm an offer from Manchester United. pic.twitter.com/sv5vM1We2N

The interest was huge, but again there was no Manchester United update as the footballer told the world about his new venture. That was June 7th, and the whole thing somehow dragged on until July, every ounce taken. 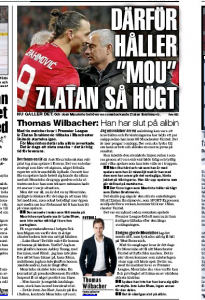 It can’t be the same this time, but it’s already a mini version.

LA Galaxy links have been regular, and Jose Mourinho has said he’ll be happy whatever decision Zlatan makes.

In the midst of all this, the Manchester United player has released an A-Z underwear range, report Swedish newspaper Expressen on the same day LA Galaxy claims resurfaced. Uncertainty is helping bring attention, and it’s useful.

Still, Expressen reiterate on Tuesday that, according to their own information, Zlatan Ibrahimovic will renew at Manchester United.

It’s just a matter of time.