Liverpool have confirmed Joel Matip will miss the remainder of the season after suffering an injury setback.

Prior to the duo’s arrival, the Premier League winners were also interested in Duje Ćaleta-Car, but Marseille weren’t willing to let him leave.

This has been relayed in today’s edition of Mundo Deportivo and they further explain why the defender wasn’t in favour of joining the English champions.

It’s claimed the 27-year-old didn’t want to leave the La Liga side midway through the season because he wants to regain his place at the Camp Nou.

Umtiti has been struggling with multiple injuries after his triumph with France at the 2018 World Cup. Since then, his physical condition has restricted the number of appearances and the former Lyon man has made only three starts in the league this term. 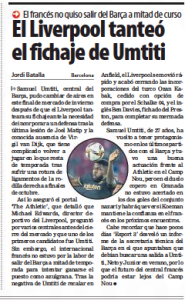 Mundo add the Frenchman’s ‘refusal to go to Anfield’ saw Liverpool sign Kabak and Davies to strengthen their defence.

Umtiti is unlikely to have a long-term future at the Camp Nou even if he becomes successful in regaining his place at the club.

A few days ago, Esport3 revealed a report of Barca technical secretaries that stated the Catalan club will look to offload Umtiti in the summer.