Home Europe Reason Everton offer was rejected – As scouts get to work ahead...
SHARE

With great performances in the Copa America, Colombian striker Luis Diaz became one of the names to keep an eye on by the end of the summer market. The 24-year-old was linked to the likes of Bayern Munich and Everton, although no one could take him from Porto.

Now the player is keeping that good form in Portugal, with five goals and one assist in six league games, which means his name is back on the rumour mill already.

We see a couple of stories about that today. One of them comes from newspaper A Bola, who recall Bayern Munich’s interest, and detail what happened between Everton and Porto.

It’s said the Toffees ‘really got ahead’ with an offer of €30m plus the loan of James Rodriguez for one season. The midfielder, however, was turned down by the Dragons’ manager Sérgio Conceição and the board, even though they were ‘pressed’ by their need for money. The Portuguese club also considered the growth in the striker’s market value in the future. 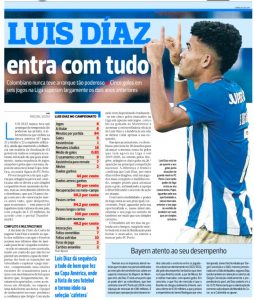 Now even though there are no signs Everton could be back for Diaz in a near future, we should highlight a story today featured by Correio da Manhã.

The newspaper writes the striker has been a ‘target of observations’ from scouts of ‘some of the main European clubs’.

According to Correio da Manhã, English and Spanish clubs have been watching Diaz’s performances and could go for the signing in the January market.

Now we can only wonder if Everton are among the potential suitors.