Eerling Braut Haaland securing himself a buyout clause at Borussia Dortmund meant, as long as he played well, which he certainly has, there’d be transfer rumours around his future almost from day one.

That’s why including such a clause put some off, namely Manchester United. The player’s future would very much be in his own hands and that of his agent, Mino Raiola.

Right now, the strongest rumours are coming from Spain.

Saturday’s edition of AS reports Real Madrid are considering signing the Borussia Dortmund player for €75m in the next winter transfer window. Whether the clause is applicable then would be questionable.

Regardless, Madrid are said to be considering the player, and he’s thought to fit their ongoing plan of signing young players.

It’s not just AS going with Real Madrid claims on Haaland, Saturday’s edition of Marca does the same. 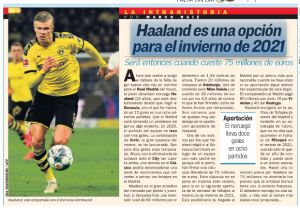 nine, with Luka Jovic failing to impress after arriving in the summer.

Haaland is in pole position, and it’s explained Real Madrid currently have good relations with Raiola.