Georginio Wijnaldum moving to PSG from Liverpool in the summer was seen as a real coup for the French club.

Jurgen Klopp had wanted to keep the midfielder at Anfield, and was disappointed when no renewal agreement could be found. That saw the Dutchman able to leave Liverpool on a free transfer, subsequently he had multiple options when it came to choosing his next destination.

Speaking earlier this week, Wijnaldum said there’d been talks with both Barcelona and Bayern Munich before he decided to commit to PSG. He’s also spoken about issues behind the scenes at Liverpool, making it clear he wasn’t happy with how his renewal was approached.

The Ligue 1 side drew 1-1 with Club Brugge on Wednesday evening, which wasn’t the Champions League start they were looking for.

L’Equipe give Wijnaldum just 3/10 for his performance, the lowest of the team, but it’s the words which will sting most. The French newspaper say the player has been a ‘real disappointment’ since his arrival from Liverpool. 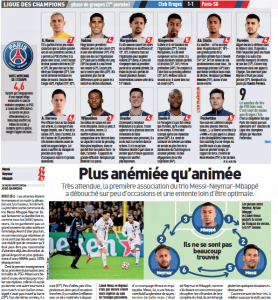 He’s been mediocre ‘at best’ with the ball at his feet, and is facing ‘great difficulty’ when it comes to duels with others, something it had been thought was a strength.

In the match against the Belgium club, Wijnaldum didn’t make it past half-time and was replaced by Julian Draxler, which tells a story in itself.

Elsewhere in their Thursday edition, L’Equipe say: ‘Orphan of Marco Verratti, master in the field, the Parisian midfield have never known how to get rid of the Belgian pressing. Georginio Wijnaldum, still very disappointing last night, illustrates this deficiency.’