Bayern Munich are in talks with Reading FC left-back Omar Richards as they eye up the 22-year-old on a free transfer.

That’s according to SportBILD, who say the Reading man is being eyed up as part of a new strategy for the German champions.

They explain that with the current financial situation around Europe, Bayern have thought up a new savings policy moving forward.

They only intend to make transfers if they are available on a free or in the €10-15m range; otherwise, they plan to rely on talents from their own ranks.

That has led them to Richards, who will be available on a free transfer in the summer when his contract with Reading comes to an end.

It is that which makes him ‘particularly interesting’ for Bayern chief Hasan Salihamidzic and his chief scout Marco Neppe. 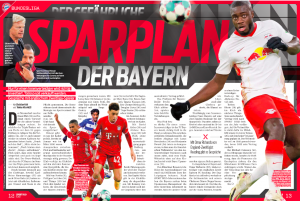 The idea behind the deal is that is Theo Hernandez moves to centre back to cover the loss of David Alaba, someone else will be needed for Alphonso Davies at left-back.

Thus, they are looking at a deal and Richards could be provided with the chance to make a very big step up early on in his career.