Not long ago, Pedro Mendes’ transfer to Reading had been reported by the Portuguese media as something very likely for the January transfer window.

With the striker having his loan at Almeria cut short in the middle of the season, he’d return to Sporting and immediately be on his way to the Championship side.

However, the move doesn’t seem that close now, even though the Royals continue to be in the picture.

Newspaper O Jogo brings a short story today reporting that the striker has just arrived back at Sporting and is now waiting for a new move. 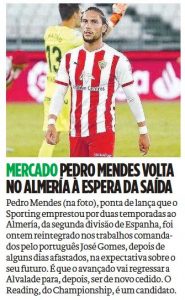 When speaking of his future, the outlet writes that Reading ‘are a candidate’, with no more details on how advanced the transfer could be.

Mendes’ move to Reading had previously been reported as ‘well forwarded’ by the Portuguese press, with the Spanish media then claiming the Royals were the ‘best placed’ in the race.

The striker didn’t have manage goals in his 10 appearances for Almeria this season, and is certainly hoping to do better wherever he goes next.