Other than Everton, who currently sit top of the Premier League after five games, there is one club surprising everyone: Aston Villa.

Narrowly missing out on relegation last season, Dean Smith’s men reinvested heavily into their squad over the last transfer window, and it’s worked a charm, allowing them a 100% success rate so far.

Their hefty expenditure following their promotion last season didn’t entirely pay off, but it did build some blocks on which the current team is based.

This allowed their manager to tweak certain things on the market with, as a certain famous Kazakhstani journalist who’s back in the news would say, great success.

Aston Villa currently sit second in the table with 12 points and a game in hand, smashing Liverpool 7-2 along the way, and a win against Marcelo Bielsa’s Leeds on Friday would help them solidify their perfect start.

Even Gazzetta dello Sport in Italy are impressed, dedicating a whole article to the Villains, contrasting them to how badly Real Madrid have been doing down their end.

With €80m spent, they have plugged many holes, including that of the striker, bringing in Ollie Watkins in from Brentford, shoring up their goalkeeper position with Emiliano Martínez and savvily getting Premier League experience on loan in the shape of Ross Barkley. 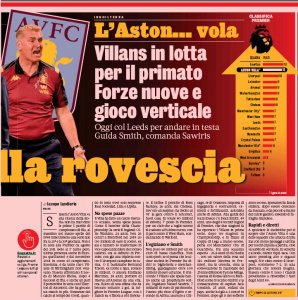 Gazzetta simply do this to try and get their readers interested in a team they might have overlooked until very recently, but they seem fully behind the project put in place by Nassef Sawiris, commending the fact they have stuck by Dean Smith, one of the few English managers in the Premier League.

Their ‘expert’ squad, with an average age of 26.8 years, is still growing, as shown by the explosion of Jack Grealish and Tyrone Mings, and their style of play, described as ‘rapid and direct’, is as far from the possession game many have come accustomed to in England’s top-tier.

They dismantled Jürgen Klopp’s side a few weeks ago, beat Brendan Rodgers very recently, and it’s now up to Bielsa to see if he can stop what is quickly becoming a problem team in the early days of the current season.