It’s a big evening for the club, manager Giovanni van Bronckhorst, and the huge army of travelling fans. Over 100,000 supporters are expected in Seville today, with the majority cheering for Rangers.

Only a minority will have tickets to the match, and whilst fan-zones have been set up for both Rangers and Eintracht supporters, there will inevitably be an awful lot more pressure on the city centre, and specifically the historic centre of Seville.

There’s of course worry locally, and that’s being covered in the local media. Interestingly, one aspect which is causing big concern is toilets… and portaloos being set up around churches and other historical monuments.

Wednesday’s edition of ABC Sevilla has two articles on the toilet situation, and there’s specific anger after urinals were set up outside El Salvador church, which ABC describe as one of the ‘most emblematic temples of Seville’. 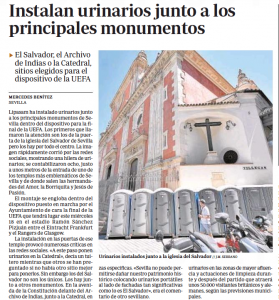 The annoyance is directed towards the authorities, rather than Rangers or Eintracht fans, and locals are quoted saying things like:

“At this rate they’ll put urinals in the Cathedral.”

“Seville cannot afford to damage our historical heritage by placing portable urinals next to facades as significant as El Salvador.”

Diario de Sevilla have a headline reading: ‘The controversial urinals’

They also cover the El Salvador situation, and say the church is ‘a benchmark of baroque architecture and considered the second Cathedral in the city due to its size’.