Dutchman Van Bronckhorst replaced Gerrard at Ibrox back in November when the former Liverpool midfielder left the club to join Aston Villa.

Gerrard proved to be a major hit at Rangers after taking up the position in June 2018, his first as a manager.

It meant Van Bronckhorst had big shoes to fill upon his arrival, something he has managed to do so far, enjoying 25 wins in 37 games, a 67.5% win percentage and leading Rangers to the Europa League final. 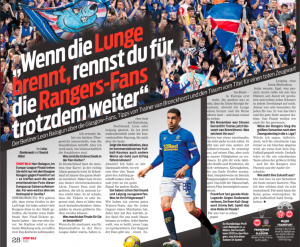 His time in charge has seen him implement a different style to the one Gerrard employed, and Balogun insists the differences don’t stop there.

“Steven was a bit more emotional; Gio is more at peace with himself,” he told SportBILD.

“He gives us confidence in a different way. He encourages us to trust in his plan but also in our abilities.

“He gives you many tactical tricks and subtleties that improve you. Little things that end up making a big difference, for example, in passing accuracy and positional play.

“This helps the team to implement its plan in the best possible way.”