On Friday, a scout from Rangers was spotted in Setúbal, where he was watching Vitória’s clash against Gil Vicente.

And it looks like the official stayed in the South of Portugal, since on Saturday, the Glasgow side had an emissary at Benfica’s game as well.

As reported by newspaper Record, a Rangers scout watched Benfica’s league clash against Braga, which finished with a 1-0 win for the away side.

In a disappointing game for the Eagles, it was Braga midfielder Palhinha who was the man of the match after scoring the winner at the end of the first half. 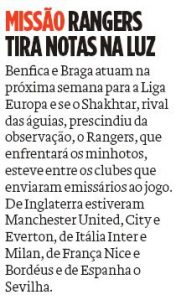 Steven Gerrard’s side are facing Braga in the Europa League this week, so they obviously had a very good reason to see the Minhotos in action a few days before the clash.

Scouts from Manchester United, Manchester City, Everton, Inter Milan, Nice, Bordeaux and Sevilla have all attended to this match as well.