According to a claim in the Turkish media, Scottish giants Celtic and Rangers are still going head to head to sign Fenerbahce winger Bright Osayi-Samuel.

The young forward has been linked with the two Glasgow clubs in recent weeks as they look to bolster their squads ahead of next season. Rangers’ manager Steven Gerrard will be looking to reclaim their league title whilst Ange Postecoglou has been appointed to bring it back to Celtic Park.

Fenerbahce signed the Nigerian winger from QPR on a cut-price fee during the last winter transfer window, but the player has struggled to adapt to Turkish football. 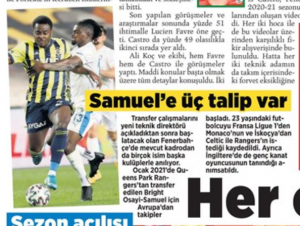 Milliyet claim Fener could sell the 23-year-old to raise some funds for the upcoming transfer window.

The report says Celtic and Rangers are battling it out for Osayi-Samuel’s signature, and along with them he has a few admirers from England.

Osayi Samuel made 18 appearances in the Super Lig last season, scoring just one goal and providing one assist. His contract with Fener will expire at the end of June 2025.