Regardless of the uncertainty surrounding whether or not the Premier League will end and if contracts running out at the end of June will be given an extra couple of months should football resume, it seems Jan Vertonghen is living his last few months in a Tottenham shirt.

The defender’s deal will expire, and, as HLN point out in Belgium, Spurs ‘do not want to offer him security for several years’.

That means a move abroad will likely take place, and the same newspaper explain it is ‘raining phone calls’ for the Belgian, ‘especially from Italy’ where Inter, AS Roma and Napoli are ‘on the market for cheap experienced defenders’.

As we all know, two sources are better than one, and what has been said here is echoed by Corriere dello Sport, who explain, once again, that Vertonghen is one of the options Antonio Conte is considering to help plug the gap that will likely be left by Diego Godín’s departure. 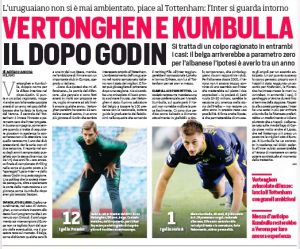 That isn’t all, as they also mention Spain, which HLN explain is an area where ‘his agent is trying to find openings’.

As for the type of club Vertonghen is looking for, they state he’s ‘aiming high, at a club that plays European football, in a great city’.

All of this makes sense, and why not shoot for the stars? Especially when it will likely his last big contract at a good club.