Everton are back on the chase for Sporting midfielder Matheus Nunes, according to the latest reports from Portugal.

Newspaper Record today writes that with Rafa Benitez now interested in the signing, the Toffees should once again work for this signing this summer.

Nunes had been linked to Everton back in a time when Nuno Espírito Santo was pointed out as the favourite to have the job left by Carlo Ancelotti. At that time, it was ‘practically certain’ that the midfielder would be moving to the Goodison Park.

However, with the Toffees signing Benitez, the Spanish manager wanted to have a word on the club’s new signings, according to Record, he liked the information he had about the 22-year-old, meaning he is now ‘willing to receive him’. 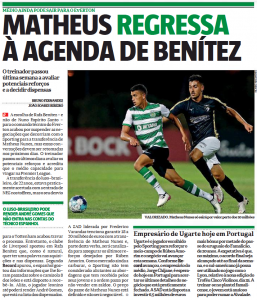 The newspaper says that Sporting want between €18m and €20m for Nunes’ transfer.

It’s claimed that the club will not make any discounts for his move, since they’re not planning on making other big sales in the current transfer window.

With André Gomes said to be in Everton’s release list, the belief is there could even be a deal involving the two players, but that remains to be seen.