Home Europe ‘On their radar’ – Liverpool have plan for big signing should Jurgen...
SHARE

Philippe Coutinho has been linked with a return to Liverpool since not long after he left the club.

The Brazilian was excellent for the Reds, and that encouraged interest in him from Barcelona. He pushed to get himself away from Anfield, yet his experience with the Bluagrana hasn’t been what he’ll have expected when he made the move.

Barcelona haven’t been sure how to use Coutinho, and he’s also suffered from injury issues. A loan to Bayern Munich worked out well, yet since then there hasn’t been the step forward everyone involved will have hoped for.

Tuesday’s edition of Mundo Deportivo covers a possible transfer, and explains that the player’s agent, Kia Joorabchian, is working in the background. Tottenham is the main club linked, but the Catalan newspaper insists Liverpool are also interested. 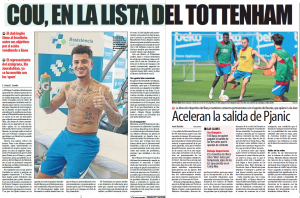 The stance is that should Jurgen Klopp lose a star in the ongoing transfer window, then Liverpool have Coutinho on their agenda. Barcelona are open to a loan or a permanent transfer, and for the Reds, the player is ‘on their radar’.