Everton were linked to Denzel Dumfries ahead of Euro 2020, when it was thought PSV would let the player leave for around €15m.

That wasn’t an exit clause, those are not common in Dutch football, just what the player’s agent, Mino Raiola, had been told he could market the fullback for.

A string of good performances for the Netherlands at the Euros saw claims in the Dutch media that PSV would now be looking for more than that, perhaps pushing it higher than €20m.

In mid June it was reported Everton were the ‘main candidate’ for the signing, then on July 3rd claims came from De Telegraaf that the Toffees had been ‘ousted’ by Inter Milan.

Monday’s edition of De Telegraaf reports that PSV expect to sell both Dumfries and Donyell Malen before their Champions League qualifier against Galatasaray on July 21st. 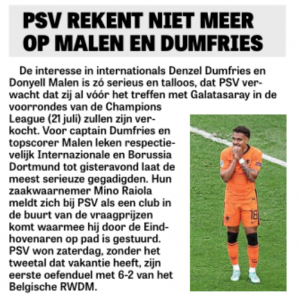 According to the newspaper, as things stood last night, Borussia Dortmund seemed the ‘most serious candidate’ for Malen, and Inter Milan for Dumfries.

There’s no claim of asking price, although PSV have one and have told Raiola to report to them when a club comes close.

Everton look to have a challenge on their hands.