Preston North End striker Emil Riis has shared his delight at his form for the club this season and his subsequent call up to the Denmark squad.

Riis joined Preston from Randers in his homeland in October last year but only managed three goals in 39 games in all competitions for the club.

This season has been completely different for him, though, with the striker managing 11 goals in 21 games in all competitions so far.

That’s seen him earn his first call up for Denmark’s senior side, with the Preston star sitting on the bench for the recent defeat to Scotland.

That’s something that wouldn’t have happened without his form for Preston, and the striker is more than aware of that fact.

“It’s super-fantastic. It’s something I’ve been dreaming about. That it would go so well, so it’s just super-awesome,” he told Ekstrabladet.

“This national team selection is definitely helping to give me more blood in my teeth.

“Now there are about four months until the next selection, so I have plenty of time to prove that I’m going next time too.”

Riis’ spell with Preston is his second shot at success in England, having previously had an unsuccessful spell with Derby.

He joined the Rams as a youngster from Randers U19 side and worked his way up their youth ranks, moving from the U18s to the Under 23s.

He managed seven goals and four assists in 30 games for the latter but was never given his chance in the first team, instead moving to VVV-Venlo on loan and then returning to Randers. 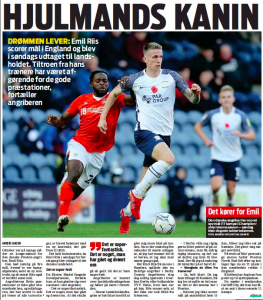 His form there saw him return to Preston, and he says it was a lack of belief from coaches that halted things the first time.

“At Derby, I really wanted to try out at senior level, but I never really got the chance, and that’s why I came to Holland. There I got about 50 minutes in six months,” he added.

“When I came back to Randers, I got to play a lot. It’s the same here at Preston.

“Even though I don’t score goals in a row all the time, I don’t get put on the bench. It gives me a lot of confidence.”