Agreeing a deal with the player was never likely to be a problem, but after their initial offer, of around €50m, the Blues didn’t return with an increase. At Sevilla they expected that return, and there was some confusion when it didn’t arrive.

Given a higher bid from Manchester City had been rejected a year earlier, it was always unlikely Chelsea would be able to sign the Frenchman for €50m. That they didn’t improve on that suggested that the interest wasn’t as strong as thought.

Since then, multiple Sevilla officials have spoken about the offer on repeat occasions. The club’s president Jose Castro has had his say, as has sporting director Monchi.

The offer, and specifically that it was rejected, is continually being presented as a sign of strength by the La Liga club, to show they weren’t in such financial worries that they’d need to just take anything.

Castro has now mentioned it again, with Spanish newspaper AS quoting him as saying: “To say that the club is broke is ridiculous. Last season we had a surplus, after a season 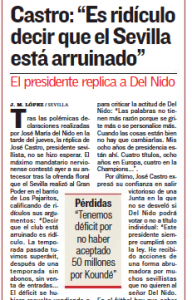 without season tickets, without ticket sales… The deficit would have been resolved by selling Kounde and we showed that we are economically powerful and we will not accept €50m. To say that Sevilla is broke is not to have affection for the club.”

It’s all beginning to sound like a case of doth-protest-too-much, and should Chelsea really be keen, then throwing that offer back into the ring, perhaps with face-saving bonuses to please Sevilla, may not be such a bad idea.

“Would be good for him” – Player encouraged over transfer to Chelsea, defender is ‘good, strong and fast’

“Would be good for him” – Player encouraged over transfer to...

Newcastle have ‘without a doubt’ made ‘most spectacular’ offer for player...