Portuguese newspaper A Bola today features a piece saying the English chase for Sporting winger Jovane Cabral is still on.

They recall that the player has been wanted by Premier League sides for a while now. Especially by West Ham, who made a bid and failed to agree a deal for his transfer last summer.

The outlet then claims that the likes of Fulham and Southampton also became interested in the signing, although neither of them presented an offer for the 22-year-old.

Now, according to the report, there’s a fourth side joining this battle. A Bola couldn’t get the name of the club, but says they’re preparing a €15m bid which could be enough for a deal. 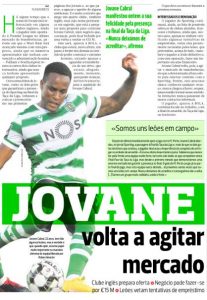 A Bola reports this unnamed club are now ‘one step ahead’ of West Ham, Fulham and Southampton, and Jovane’s transfer to the Premier League could happen in the next week.

The winger has six goals and two assists for Sporting this season, and with no advance in the talks for a new deal, his departure starts looking more likely.

Now as we wait for the name of the Premier League club to be revealed, perhaps there’s still time for West Ham, Fulham or Southampton to raise their bids.