Mauricio Pochettino takes his men to the Camp Nou as Paris Saint-Germain take on Barcelona in the first leg of the Champions League last 16 tie on Tuesday.

The Ligue 1 winners will be without Neymar and Ángel Di María for the midweek clash as the duo are sidelined with injuries.

Gerard Piqué, who has been out of action for the past few months, has started training and could be eligible for surprise selection for the clash against the Ligue 1 winners.

We’ve taken a look at the starting XIs predicted by the major newspapers in Spain and France, starting with Mundo Deportivo.

Marc-André ter Stegen is expected in start in goal, with Sergiño Dest and Jordi Alba to feature as right-back and left-back respectively. Clément Lenglet will be in the heart of the defence, alongside one of Piqué or Óscar Mingueza.

MD are predicting Ronald Koeman to use a 4-3-3 formation, with Sergio Busquets, Frenkie de Jong and Pedri in the midfield, and Lionel Messi leading his side’s attack, along with Antoine Griezmann and Ousmane Dembélé.

Sport have gone with the same starting XI as Mundo, with them predicting Mingueza to partner Lenglet in the heart of the back four.

L’Equipe also have a similar lineup, with only one change, where Samuel Umtiti is replacing Mingueza/ Piqué in the centre-back position.

Now we take a look at PSG’s predicted lineup, and both Mundo and Sport expect Pochettino to use a 4-3-3 lineup. The two Spanish outlets have predicted the same defence and midfield, with Keylor Navas starting as goalkeeper. 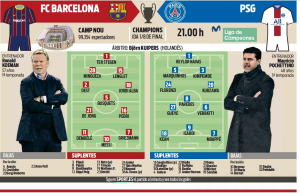 Marquinhos is expected to partner Presnel Kimpembe in the middle of the back four, with Alessandro Florenzi and Layvin Kurzawa as the two fullbacks.

In the midfield, Marco Verratti, Idrissa Gueye and Leandro Paredes are to start for the Paris based club.

Kylian Mbappé will be the main man to lead PSG’s attack, along with Everton loanee Moise Kean.

The only change in Mundo and Sport’s possible lineup for PSG is up front, where the former have predicted Pablo Sarabia to start on the right wing position, with Mbappé playing up front. 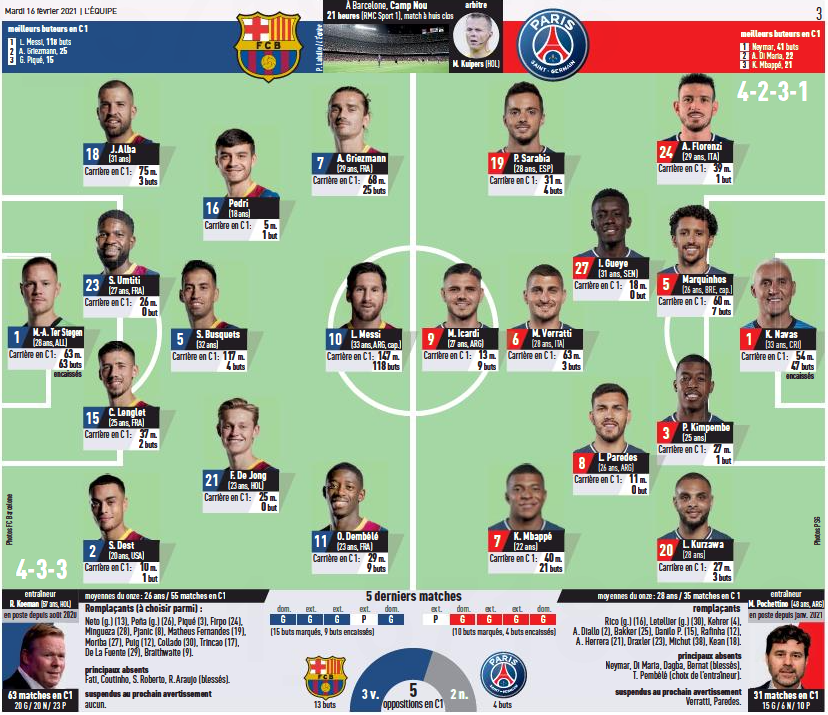 L’Equipe have seen the former Tottenham Hotspur manager deploy a 4-2-3-1 formation, with Florenzi, Marquinhos, Kimpembe and Kurzawa in the defence, ahead of Navas. Gueye and Paredes are included in the French daily’s two-man midfield.

Verratti is deployed higher up the pitch, as an attacking midfielder or in the No. 10 position, with Mbappé and Sarabia playing on the left and right wing respectively. Icardi is expected to lead PSG’s attack, with Kean on the bench.