The future of Hirving Lozano is a big uncertainty in Naples these days.

The Mexican arrived from PSV Eindhoven with a lot of expectations last summer, which he never really met, regardless of whether it was Carlo Ancelotti or Gennaro Gattuso in charge.

With the summer approaching and Napoli trying to sort out who they will and won’t keep, Lozano is somewhere in the middle, but that could change if Everton come knocking.

Since it was Ancelotti that brought him to the south of Italy in the first place, it seemed natural for the Italian media to link the winger with a move to Goodison Park, and they’ve stuck by it.

Take Corriere dello Sport’s Tuesday edition, as they state that while Napoli ‘do believe in Lozano’ as they ‘reflect on various tactical options’, the ‘presence of an offer that meant no loss was made’ could lead to a ‘possible opening’. 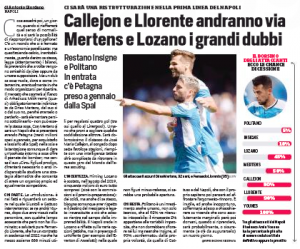 They immediately mention ‘Ancelotti’s Everton’ as the ones potentially capable of doing this, which would mean Marcel Brands would have to sanction a fee of at least £35m for a transfer to take place.

It wouldn’t be the first time the Toffees spent that much on a player, but with Lozano struggling for form last season, as he scored just three goals and assisted twice in 23 appearances, it would certainly be a bigger gamble than Richarlison or Gylfi Sigurdsson ever were.