For Derby County and Middlesbrough fans, the name Julien de Sart may not be one you’ll want to remember that fondly, but you might be glad to know the midfielder is now enjoying himself back in Belgium.

A key member of KV Kortrijk’s team these days, he’s managed to score four goals and five assists in 27 games, which a far more productive role than he ever managed at Riverside or at Pride Park.

De Sart was at Middlesbrough for two and a half years, with a year and a half of those spent out on loan to Derby and Zulte Waregem, but ask his brother if he hated his time in England, and it’s the exact opposite.

Alexis De Sart is two years younger than him, currently plays for Royal Antwerp, and sat down with Sport/Foot Magazine to discuss his future, where he touched upon what happened to his brother in the Championship.

They point out that as soon as he arrived at Kortrijk, he spoke of a career abroad, which many took for arrogance.

He explained: “It’s not arrogance, it’s ambition. Of course I feel great here and if the game continues to grow, I don’t see any reason to leave short-term, but it’s logical that at 23, I tell myself it would be nice to play in another league one day. I’m not saying I’d manage to impose myself in a big league, but I’d like to try. 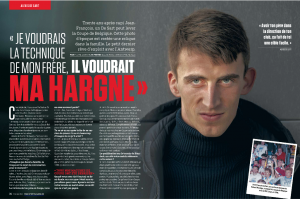 “What Julien went through in England, it makes me think. From the outside, you can get the impression that he didn’t do too well at Middlesbrough and then Derby County. What I heard and read wasn’t especially positive, but if you talk to him about it, it’s just positive.

“The Championship has a great level, we know that, and even if he didn’t play that much, he said that he progressed a lot over there. Plus, it did him the world of good to expatriate himself at that time, because it had got so complicated at Standard Liège. It was the right time to try something new, and every time we talk about his time in England, it gives me even more desire.”

During his time at Middlesbrough, Julien de Sart only managed three appearances, while his six month spell at Derby produced a goal and an assist in 11 games.