Wahbi Khazri is having a good season on loan from Sunderland at Rennes.

The 27 year old was so good in the first half of the campaign that there were claims of Everton interest in the winter window.

At the time, Sport Witness explained why these claims were nonsense. Khazri represented Sunderland before he moved to Rennes so was unable to play for a third club in the same season, due to FIFA regulations.

But the idea of Everton interest wasn’t crazy, other than for regularity issues, and there’s likely to be several clubs looking to sign the Sunderland owned player in the summer.

Khazri was so good for Rennes as they beat Lyon 2-0 at the weekend, scoring one of the goals, that L’Equipe have an article on Monday celebrating him.

Khazri has returned from a quieter spell with his Lyon goal, and L’Equipe say he was the ‘craftsman’ of Rennes’ impressive victory. 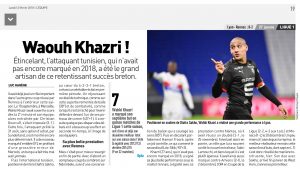 The Sunderland loanee had his best game in a Rennes shirt, according to the French newspaper, and it’s pointed out there’s no buying option on the player.

That means Sunderland can await teams approaching them in the summer, and the transfer fee could provide a big boost to Chris Coleman’s spending money.